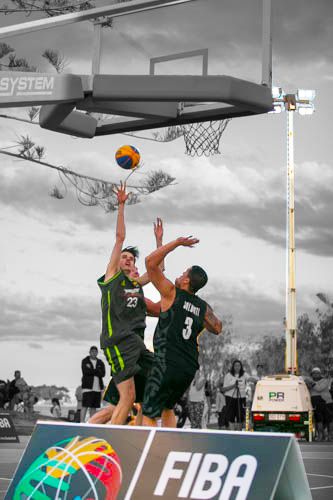 PR Power was recently called upon by the Seahawks GC Basketball Team to supply lighting towers for the 2105 FIBA 3×3 Oceania Championships held on September 12th to 13th by the Broadwater behind the Gold Coast Aquatic Centre.

The key feature of the PR-Hybrid-LED Lighting Tower is its hybrid battery/diesel system with auto charging technology. This feature allows the unit to run on 90% battery power and 10% fuel, saving on fuel costs and eliminating noise, with the Lighting Tower able to run 100% on battery power during the game.

The PR-Hybrid’s batteries have been configured so that they can also be recharged via ordinary mains power. The battery has 4000 hours life and the generator engine consumes just 0.5 litres per hour when in use – fuel usage is so low that the set can run for over 500 hours on one tank of fuel.

Adam Galle the Competitions Manager at Seahawks GC Basketball Inc said “Your lights ensured that we were well illuminated as the sun began to set and play heated up”.

“The success of the event all but ensures that it will return to the Gold Coast next year for the U18 Oceania Champs and again in 2017 for the next open event.  We look forward to being able to partner with PR Power in the future”.

Australia were eventual winners in both the men’s and women’s competitions edging out New Zealand by a single point.